Since we announced our collaboration with the World Bank and more partners to create the Open Traffic platform, we’ve been busy. We already shared an initial technical preview of the OSMLR linear referencing system, and now we’re ready to share another.

OSMLR provides a stable linear-referencing system atop the ever-changing network of roadways in OpenStreetMap. It’s used by the Open Traffic platform to associate statistics like speeds and vehicle counts with roadway segments. And it has many more possible uses, beyond just traffic statistics.

We’re now releasing a preview build of OSMLR segment tiles for the entire planet. In this blog post, we explain more about the hierarchical nature of OSMLR tiles, about the criteria for which OSM ways are used to construct OSMLR segments, and how you can download OSMLR segments for testing now.

Similarly to how the Valhalla stores its routing graph in hierarchical tiles, OSMLR segments are available as geographic tiles at three levels of roadway hierarchy:

Here are all three levels of OSMLR segments in San Francisco:

And here are all three levels of OSMLR segments in Manila, Philippines (where we’ve previously shown a prototype of Open Traffic in action):

OSMLR abstracts away the unnecessary geometric details and boundaries of OpenStreetMap ways. Instead, OSMLR segments summarize the key properties of a meaningful stretch of roadway using “location reference points”, or LRPs. (The concept of LRPs comes from OpenLR.)

We used abstract graphics to illustrate how OSM ways are turned into OSMLR segments in this previous blog post. With the preview build of OSMLR segments that is now available, we can highlight real-world examples of how OSMLR segments are generated for use in the Open Traffic platform:

A road segment represents a section of OSM way(s) between two intersections with other ways.

In some situations, one OSMLR segment may represent multiple OSM ways: 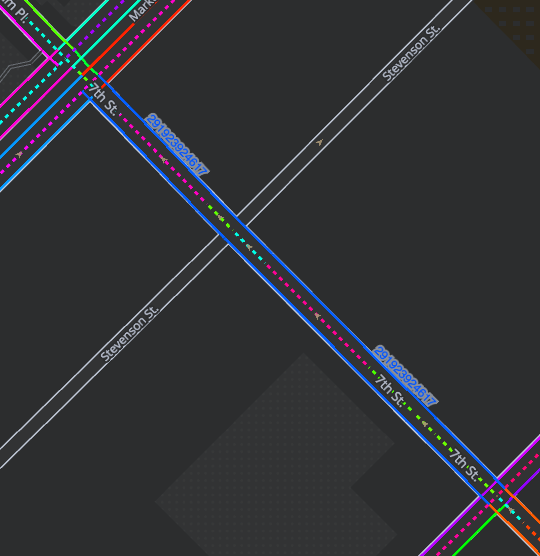 In the above example, one OSMLR segment is drawn in double blue strokes along 7th St. in San Francisco. The OSMLR segment has an ID number of 291923924617. The dotted centerlines indicate OSM ways, with a different color for each OSM way. Note how the OSMLR segment represents the entire stretch of 7th St. between Market St. and Mission St. It joins together multiple OSM ways, which were created in order to provide finer detail for bicycle lane tagging. Those differences are not relevant to OSMLR and its use for Open Traffic. Open this area on OpenStreetMap.org to explore these OSM ways.

In other situations, one OSMLR segment may represent only a portion of one OSM way: 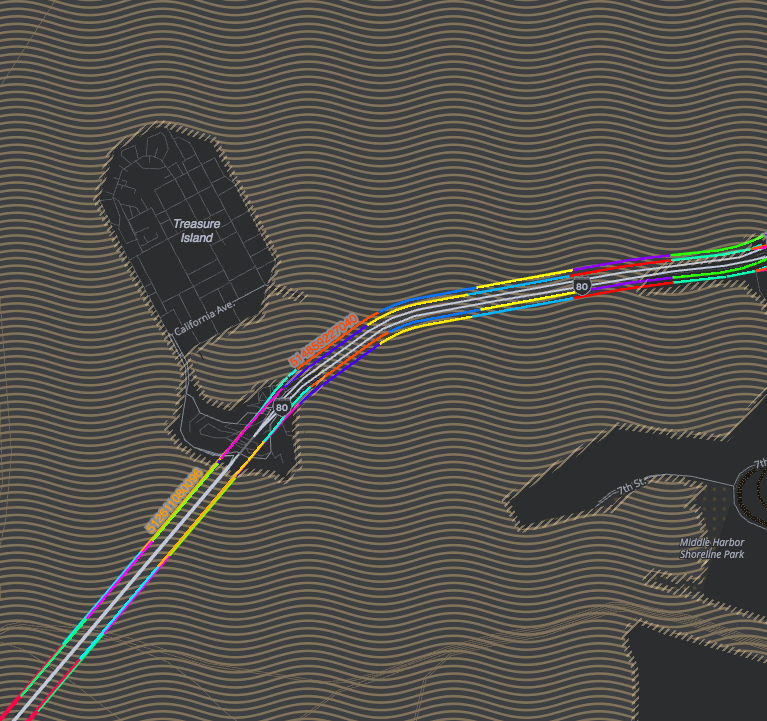 In the above example, the San Francisco-Oakland Bay Bridge is split into multiple OSMLR segments (with a different color for each). The Open Traffic platform will be able to provide different speeds along different lengths of the bridge, so we generate OSMLR segments for each kilometer stretch.

Finally, not every OSM way will be represented by an OSMLR segment at all.

A turn channel is a short OSM link (highway tag has _link at the end) connecting two road segments and is assumed to be at-grade. These cannot connect to motorway and trunk OSM ways cannot fork or connect to other links. Turn channels simplify the path or transition between two roads when turning at an intersection. 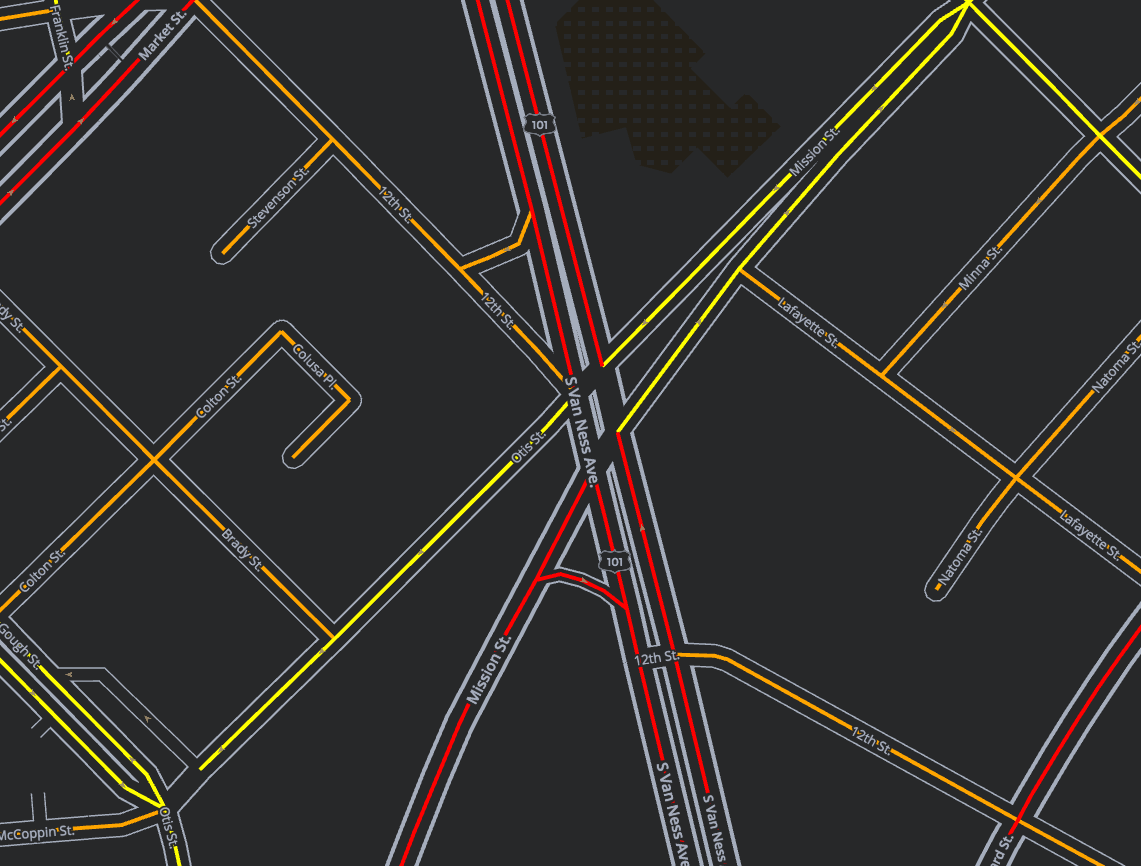 Now that you know the basics of where OSMLR segments are defined, let’s review some more specific rules we use for generating OSMLR:

Merging or connecting road segments allows OSMLR definitions to be longer on average and to better average speed along road segments. Creating average speeds or traversal times along extremely short segments can be very inaccurate, especially when the interval between sampled locations (GPS readings) becomes larger. Including a large number of very short segments also creates much more storage and processing demand. However, very long segments do not permit localization of congestion points so a maximum length of one kilometer was settled on.

We’ve used the the OSMLR generator application to cut OSMLR segments for the entire planet at all three levels of the hierarchy. Here are statistics about the process:

Not all applications require residential and unclassified road segments (the local level, 2, of the hierarchy). Some benefits of only using OSMLR for the highway (0) and arterial (1) levels include:

Now that we’ve successfully created OSMLR segments for the entire planet, the next question will be how we update the segments as the road network in OpenStreetMap changes over time.

As OSM edits are made, the vast majority of OSMLR segments remain unchanged. Even most OSMLR segments where the base road segments change will still be valid as the shape and even the endpoints (intersections) can vary slightly and the OSMLR segment remains valid. (See this previous blog post to learn more about how OSMLR uses location reference points to represent the key properties of a segment, without depending upon the exact geometry of a segment.)

Certain types of changes to OSM will invalidate an OSMLR segment:

These “breaking” changes will require deprecating the existing OSMLR segment and adding new ones. We are working on a means to mark the lineage and change history of OSMLR segments, so this information will be preserved and available in OSMLR tile files.

Read more about considerations for the update/migration process, and track our progress, on this GitHub issue.

We have created a script that gives you the ability to fetch a subset of OSMLR GeoJSON or protocol buffer tiles.

This script is located within the py directory under the Open Traffic OSMLR repository. The script uses a bounding box to determine the list of tiles that intersect with the bounding box.

For example, if you would like to download OSMLR tiles for New York City in protocol buffer format you would execute the following command:

And the GeoJSON tiles can be obtained via:

Note that this set of OSMLR segment tiles is considered a preview build. In the months ahead, we may make “breaking” changes to the ways in which OSMLR segments are generated and IDs are assigned.

So, please don’t yet depend on the stability of particular OSMLR segment IDs—but please do use this global tile set to begin exploring the possibilities for integrating OSMLR segments into your applications and analyses.

As we release new builds of OSMLR tile files, you’ll be able to view listing of the latest tile files on S3.

More in the Months Ahead

We’ll be following up in months ahead with another blog post to announce the OSMLR update/migration process. In the meantime, we hope you find this global set of OSMLR segment tiles interesting to explore and consider integrating into your own applications that need stable roadway identifiers.