Take the Bus, Gus. No looking back, Jack.

From the coast to the mountains, from the river to the sea, from the plains to the train, Mapzen is opening transit routing to the world.

Over the past few months, public-transit agency staffers and freelance data enthusiasts have submitted hundreds of GTFS feeds to Transitland, our collaborative effort to aggregate and improve transit data. As an open data platform, Transitland is intended to power apps, visualizations, and analyses by anyone and everyone. As part of the Mapzen Mobility initiative, we’ve also been busy building open-source apps and services on top of Transitland ourselves.

With this international coverage, we hope to help even more developers focus on making their own apps and digital experiences—not collecting, licensing, munging, and wrestling data—and now they have useful options available to them for working with open transit data:

Even Easier Demos for Everyone

Getting a JSON response from an API is a dependable way to power an app or a visualization, but yes, we know it isn’t that visceral of a way to experience, well, anything. Here’s an interactive drag-and-drop demo that shows off the dense transit coverage in San Francisco, Prague, New York City, Rome, Los Angeles and Vancouver. Try moving those Point A and Point B pins and see what routes, connections and schedules are possible, then advance through the slides to try another city.

Want to hack this demo for your own purposes? It’s only a two-step process:

If you don’t have the inclination to peer inside your web browser, here’s what the requests look like on ours:

The Mapzen Turn-by-Turn API offers many more options than we could squeeze into that nice drag-and-drop demo. Try modifying other parameters, like the departure date and time, using our test tool in these other cities:

The Landscape of Transit: Island, Continent, or Archipelago?

These demos may make you feel like a sea captain landing in uncharted territory. Whether it’s an island or the tip of a new continent is unclear. This sense of disorientation is, in fact, progress. Previously every transit-routing engine was an island: You or your technically sophisticated friend had to fetch individual GTFS feeds from transit-agency websites and manually merge and disambiguate stop locations included in multiple feeds. The extent of the territory was always known—and always small. Now, Transitland contributors stitch together coverage for new regions every day, and we’re starting to form an archipelago of interconnected transit islands:

This map shows tile squares where Mapzen Turn-by-Turn provides transit routing, using data provided by the Transitland Datastore. Each “island” of connectivity is displayed in a different color. Mapzen Turn-by-Turn uses the same methodology to create a connectivity map of where people can travel by auto, foot, and bike according to OpenStreetMap. (Open the world full screen ➹ )

Are you aware of an open transit data feed that’s not yet represented on that map? Contribute it to Transitland and it will appear in Mapzen Turn-by-Turn and on the transit connectivity map shortly.

North American transit enthusiasts may be disheartened to notice that “BosWash” is two separate island on the map above. The corridor between Boston and Washington, D.C. is known as the best connected region in the United States, after all, and it’s served by the only American high-speed rail line. However, open data has a different landscape than proprietary and closed data sources. The mix of public, private, and quasi-public transit operators that serve “BosWash” have yet to fully release their route lines and schedules as open data sets. We hope to have more to share about open data progress soon. In the meantime, we encourage those with an interest in data licensing to read more about how the Transitland Feed Registry helps to dispel the fear, uncertainty and doubt around transit data licenses and terms of use. When we or our collaborators have it wrong, we welcome corrections and contributions.

Expanding the Landscape of Transit Together

That’s the premise of the Mapzen Mobility: that it’s possible to create a “virtuous cycle” with data consumers also contributing back to increase coverage and accuracy for themselves and others: 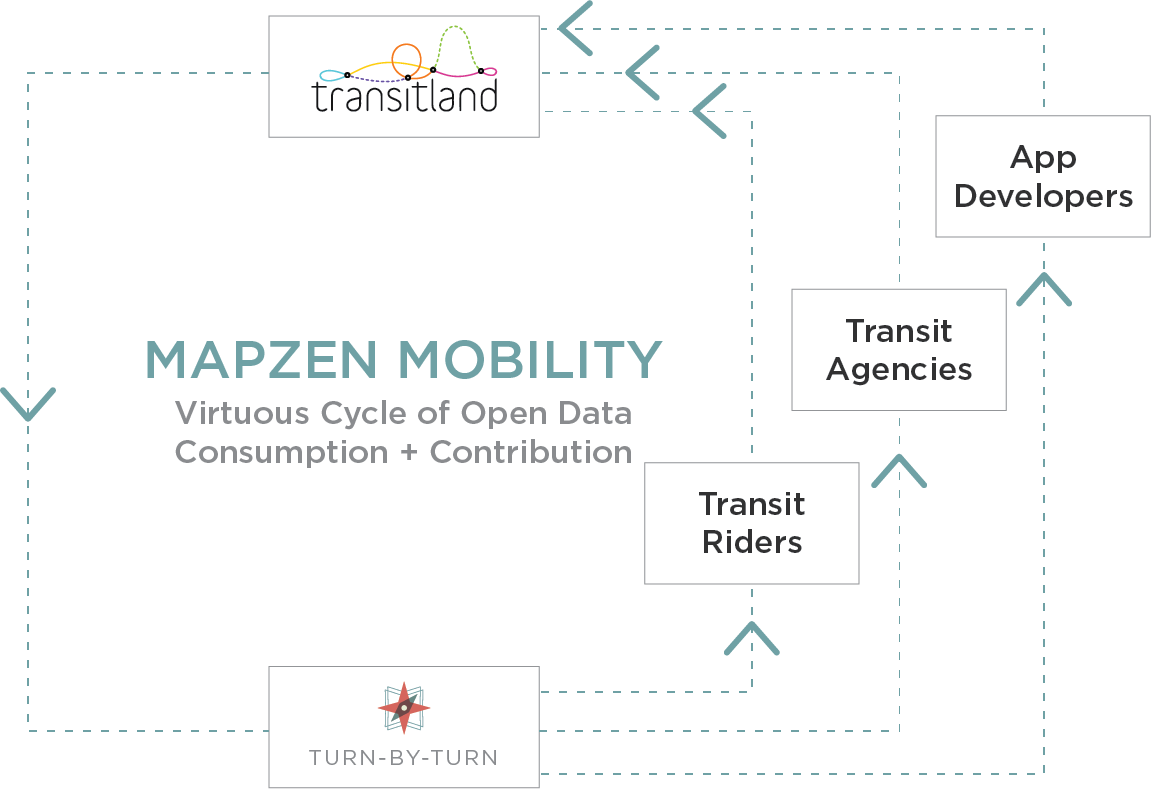 Toward that goal of sharing the cost and the promise of open transit data, we encourage you to browse the Feed Registry list of 200+ “routable” places, try planning multimodal journeys using Mapzen Turn-by-Turn, and contribute additional coverage.

Already see an operator listed as “routable” in the Feed Registry but having problems planning a trip in their coverage area? Let us know by e-mail, Twitter, or GitHub issue. To provide transit-routing around the world—with interconnected archipelagos of dependable, high-speed transit accessible to all—is a major undertaking. With Transitland, Mapzen Turn-by-Turn, and the other Mapzen Mobility services, we’re working toward that goal together with some motivated and talented partners and collaborators. Join us.