Two core components of the Valhalla open source routing engine are Thor and Sif. These 2 companions (in Norse mythology Thor and Sif are husband and wife) form the basis of Valhalla’s path generation algorithm. Thor contains the path computation algorithms and traverses the routing tiles, while Sif performs costing that is central to forming the best path. Rather than baking costs into the routing graph data, Valhalla uses dynamic, run-time costing to generate costs based on a rich set of attributes stored in the routing graph tiles. This allows run-time generation of different types of routes (or routes with different characteristics) simply by using different costing methods and options within those methods.

Naive assignment of cost to edges of the routing graph will lead to poor routing solutions. Simple costing based solely on distance or on time (based solely on speed) can lead to poor route paths with excessive turns and stops. Considerations such as turn types, classifications of roads at intersections along the route, road surface type, elevation change, road curvature, and a host of other considerations can be important. It is also important to note that different costing considerations are needed for bicycle routing than pedestrian routing or automobile routing.

Valhalla uses dynamic, run-time costing when computing route paths and can consider much more than strict time or distance. Different route types can be computed from a single set of route data tiles. There is no need to configure data each time a new routing profile is needed. Simply change the costing methods or apply different options to existing costing methods, the data stays the same.

Costing methods have access to all attributes of an edge (road section between 2 intersections) to form the cost along the edge and when transitoning between edges. Within Sif, costing methods are created by deriving a class from the base dynamic costing class or one of the existing costing classes. Each costing method must override 3 different methods to create the unique costing logic:

Checks if access is allowed for the provided node. For example, node access can be restricted for specific modes of travel if bollards are present.

Checks if access is allowed for the provided directed edge based on the prior edge along the path. This is generally based on mode of travel and the access modes allowed on the edge. It can also be used to prohibit turns where turn restrictions exist, prohibit Uturns, and to prohibit entering roads that do not have through paths.

This method gets the cost to traverse the specified directed edge. Cost includes a path cost along with the actual time (seconds) to traverse the edge. Path costs are generally time or distance and can include artifical cost penalties to avoid roads/edges with specific attributes. By returning the actual elapsed time in seconds the costing method can be applied to time dependent and schedule based routing (e.g. transit).

Costing methods can also compute edge transition costs, sometimes called turn costs. These costs are applied at the node/intersection when transitioning from one edge to another. A fourth costing method can be defined in the costing class to account for this:

In addition to these general cases, edge transition costing can be used to apply penalties for specific cases like crossing a country border, going onto a toll road, entering a road that has private access, and other cases where the route path might want to avoid specific roads or types of conditions!

One practical example is SIF costing for driving routes (auto) which penalizes left hand turns more than right hand turns by default. (In countries where driving occurs on the left hand side of the road the opposite occurs.) The simple example below shows a case where a longer path is taken so that costly left turns are avoided. In this case, two right hand turns are made and while the route is over twice as long, they are roughly equivalent in time.

A good example of how edge transition costs can affect a route path is a driving route in a gridded downtown area. A shortest time or distance path can make many different turns as it zig-zags from the origin to the destination. Applying edge transition costs will reduce the number of turns and create a much simpler route that is often shorter time in practice. The map below is without edge transition costs - it makes additional turns that complicate the path description.

The second map shows the path with edge transition costs applied - there are fewer turns leading to a simpler route. 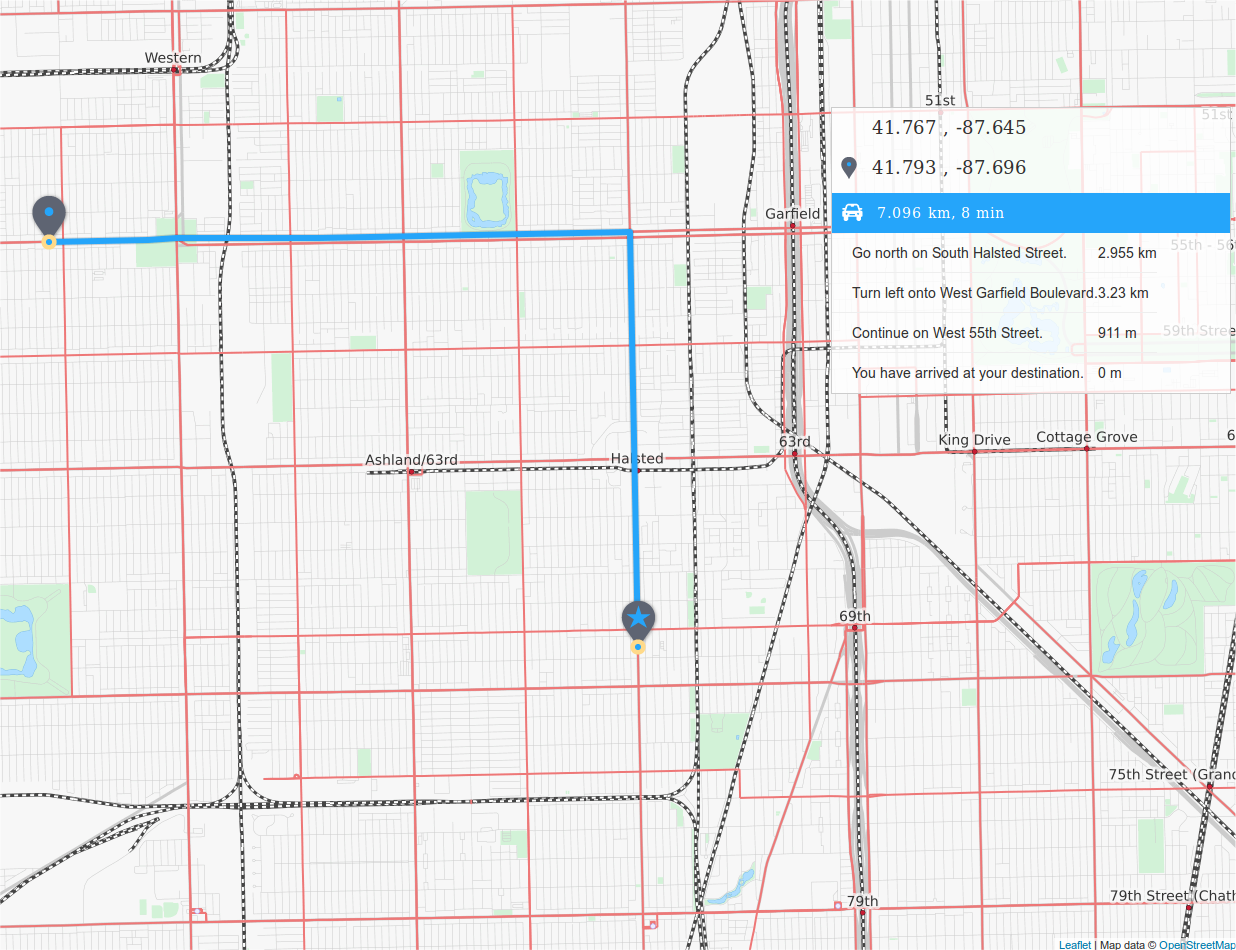 Note also in the first image that the estimated time is much less - this shows how important edge transition costs are to estimating the time along a route.

You can try out our open source routing via the Mapzen instance of Valhalla. You can also browse the code and reach out if you have questions or suggestions!