Behind the scenes, TRON2.0

GLSL shaders are small C-like programs that modify the default rendering pipeline of your graphics card and let you manipulate every pixel on your screen at full speed. I like to think of it as the language of light.

One of the nicest features of the Tangram engine is the ability to write GLSL code alongside the YAML scene files. This give Tangram’s styles remarkable flexibility.

TRON2.0 was designed with the intention of pushing this power to the limits.

Everything starts with Geraldine’s idea of making a map where the patterns change with the zoom level, providing an extra sense of scale. From there we started collecting visual references in a Pinterest board.

With some references in mind, I started making some sketches of dynamic patterns to present to Geraldine.

Our next iteration consisted of making an algorithmic color palette.

The art behind this language of light is understanding and using the expressive possibilities of numbers between 0.0 and 1.0. The palette function above, for example, takes a single value between this range and uses it to oscillate, interpolate and stretch the values between two colors, resulting in whole new spectrum of light, a spectrum that we assign programmatically to moving lines of traffic, fading buildings walls, neon highways, hillshades and shimmering oceans.

With it, we started creating the patterns that ultimately shaped the distinctive elements of TRON2.0.

Although we used this github repository for the process, we also worked in our in-house web Tangram editor environment, Tangram Play. 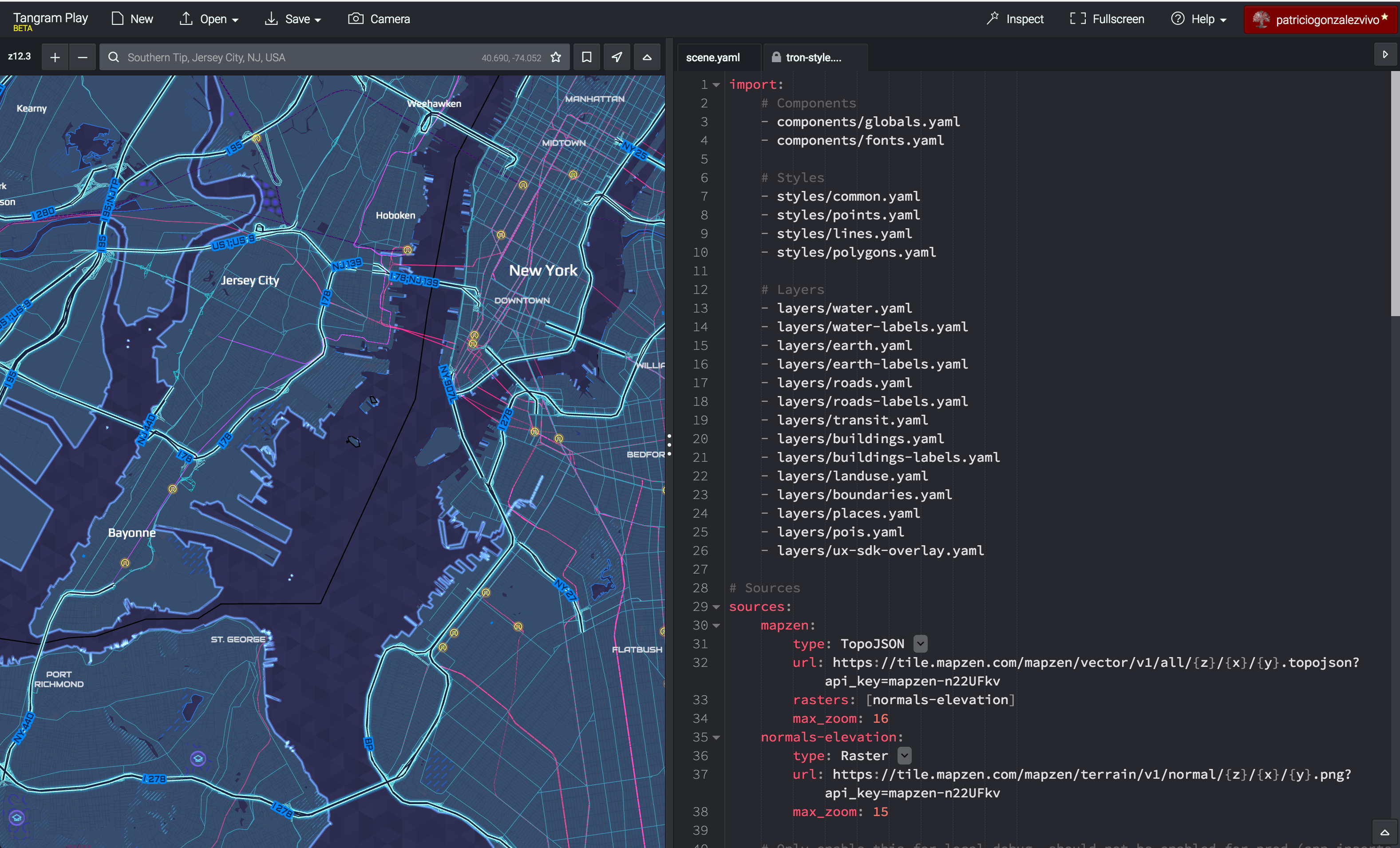 In TRON2.0, we took advantage of one of the newest features of Tangram: the import system. This allows Tangram to import any other YAML scene file, and it is easy as…

…to start editing a scene.

Try it on directly in Tangram Play

We used import to divide the scene into different folders and files, making TRON2.0 easier to read and edit. 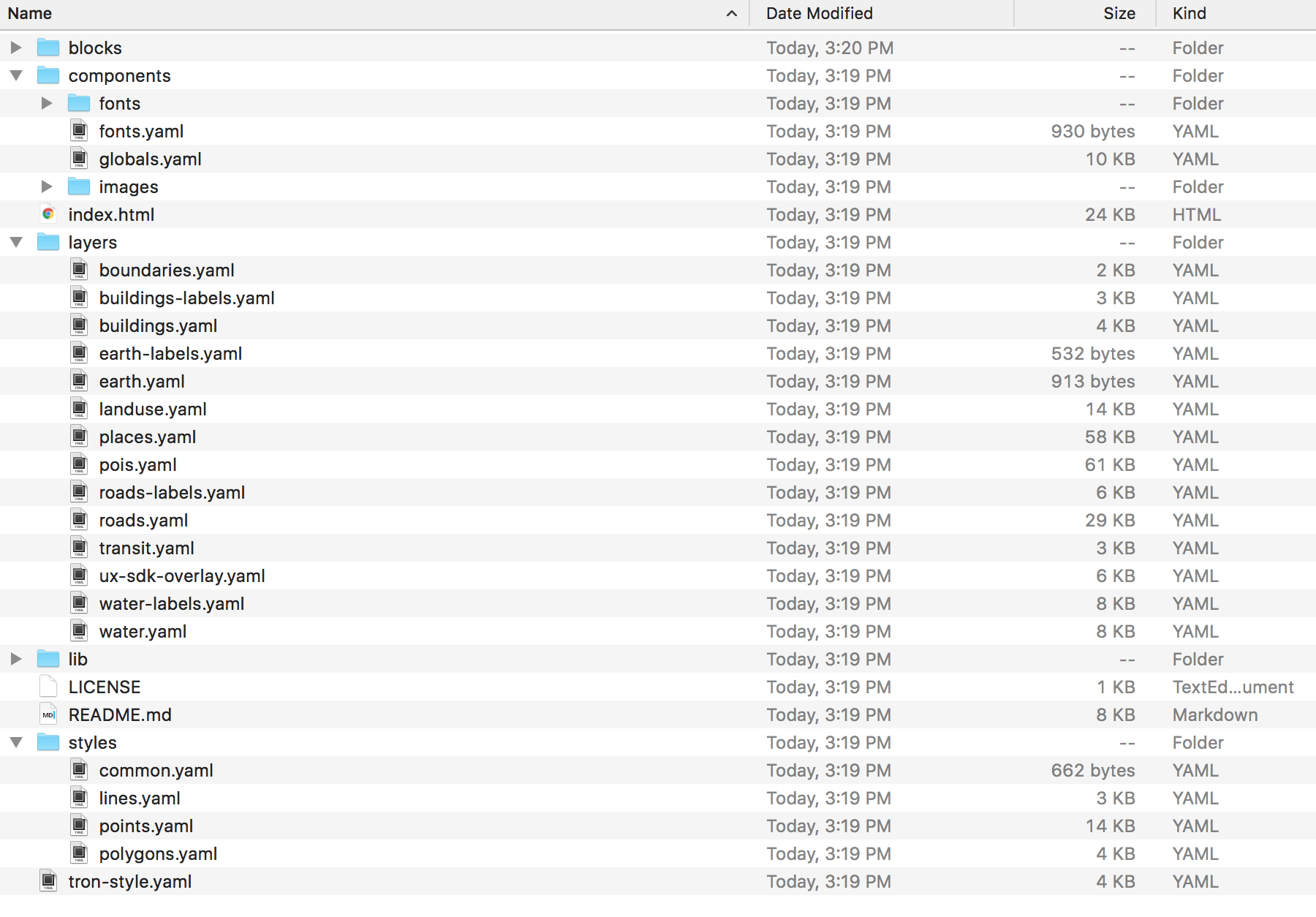 Here’s how it ends up looking:

Thanks to the new import feature, I was able to turn shader recipes into something that anybody could use in Tangram styles. As part of the effort to make GLSL Shaders more approachable in Tangram, I started building Tangram Blocks, a toolbox/library of shader snippets that can be mixed together. A lot of work on TRON2.0 involved making these blocks reusable in a production context. Each block self-documents itself, providing not only a description and examples but also helpful information like the range of the expected variables.

This is a list of some of to new patterns introduce by TRON2.0:

By the time we finished, we had a beautiful animated map. We also a a lot of related YAML scene files. Each one of them needs to be loaded before we can start rendering – this would mean a lot of HTTP requests that would affect performance.

To solve that I worked up a small Python script that lets you bundle a scene file and its dependencies and components all together into one .zip file, called Tangram Bundler.

Installing it is simple:

You use it by referring to the main YAML scene file (the one that calls all the others).

TRON2.0 was a trip of innovative concepts and ideas that we took with Geraldine. It was as much fun as it was aesthetically and technically challenging. Let us know how you use it!