How to make your code backwards (and compatible)

In Lewis Carroll’s Through the Looking Glass, Alice finds a mysterious book that’s “all in some language [she doesn’t] know”. It begins with

Tangram.min.js looked somewhat similar between versions 0.10.0 and 0.10.5. A large part of our code was backwards. Like the poem of Jabberwocky, you need a mirror to read it. 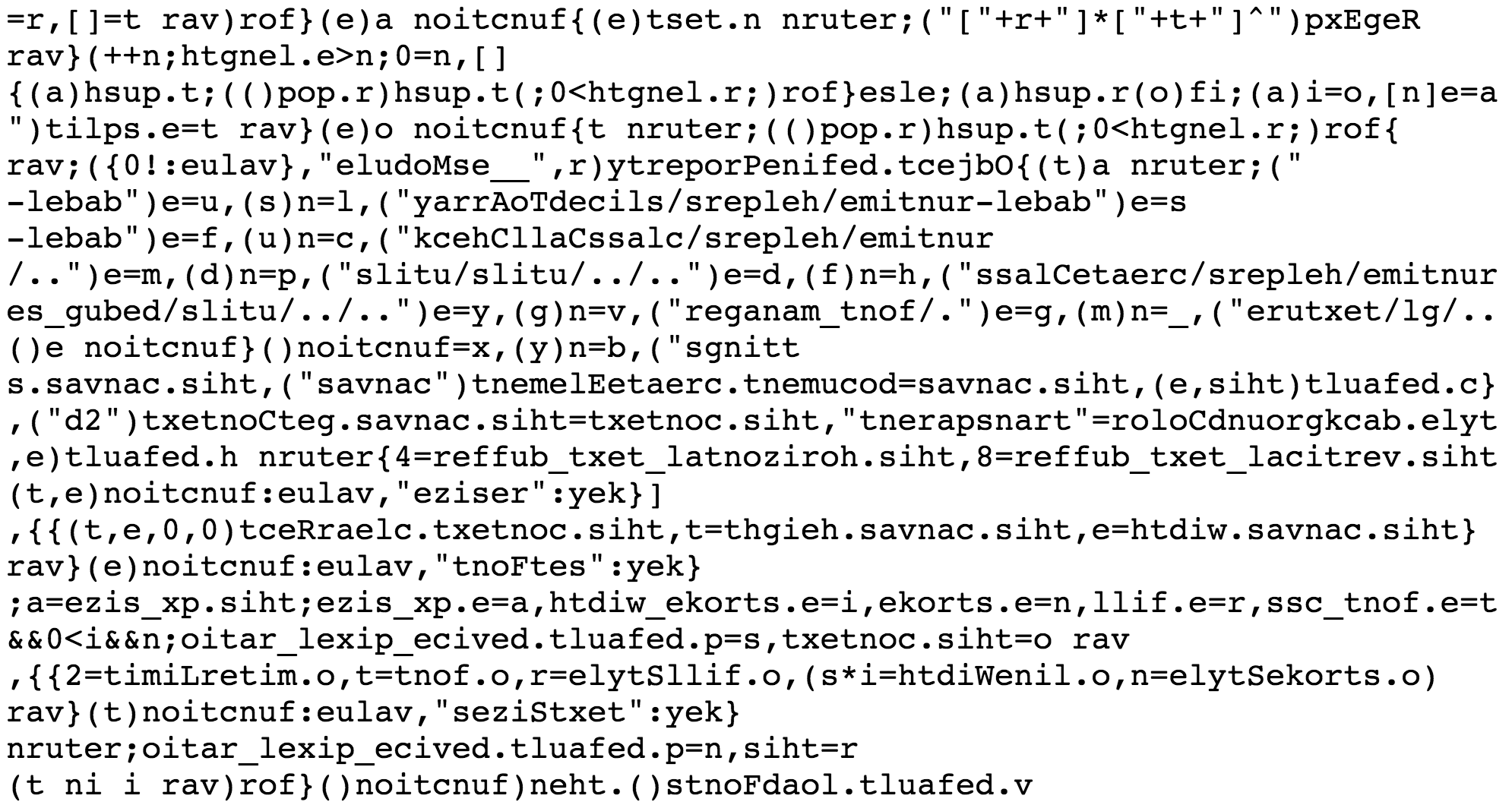 And yet, everything still worked as expected! The code only appears to go left, but its logic is all right. You can verify it for yourself by executing this simpler JavaScript example:

Here’s the story of how this happened, and how you, too, can make your code backwards (and compatible).

First, some context. Our maps render text in hundreds of languages. One place we do this is to label roads, and we’ve been recently experimenting with curving text along roads. This comes down to breaking up a label’s text into pieces, and reassembling them along a curve.

Taking Apart and Putting Back Together

It’s important that when you put letters back together they’re not out of order. However, ordering text is not as straightforward as it seems.

To dissassemble and reassemble parts of text, we need to know whether the characters are right-to-left, as they are in Hebrew, Arabic and several other languages, or left-to-right. In Tangram.js we use the following code to detect this:

For instance, isRTL("hello") will be false and isRTL("العالم") will be true. Those \u**** expressions are unicode ranges that tell what alphabet a letter comes from. For example, \uFE70-\uFEFC is the range of Arabic characters between ﹰ and ﻼ.

This lets us render right-to-left languages with ease and curve them along roads just like any left-to-right language.

Click here to see these labels adjust live in Tangram.

When unicode is interpreted, it is immediately escaped, turning it into the text it represents. This way you can type \u00A9 and get the copyright symbol ©. When our source code was bundled by browserify, our unicode was escaped and the code above became

Surprisingly, this code still works! isRTL("hello") is still true. Some may even argue this version is just as cryptic than the original. Nonetheless, our codebase has some new and colorful characters. You can see the Hebrew Hiriq (יִ), the symbol ߿ (which is the “not a valid character” character), and the Arabic Basmala (﷽). The Basmala is an Arabic phrase, drawn as a single unicode character, which translates to “In the name of God, the Most Gracious, the Most Merciful”. A religious mantra snuck into our source code!

Now we can explain why our minified source code was backwards. One of the unicode characters in our regular expression above, \u202E, is the right-to-left override character, which forces all subsequent text to render right-to-left until there is either a newline character, or a left-to-right override character to stop it. The RTL override character then acted on a large chunk of our own source code! Before minification, it only acted on the line on which it appeared. After minification this effect became exaggerated because the thousands of lines of our codebase collapsed to about 20, and a large part of one of those lines was rendered backwards.

You, too, can write code backwards

Humpty Dumpty took the book, and looked at it carefully. “That seems to be done right—” he began.

We thought this was so cool that we made an npm script for it. You can install it with

Making the code in myFile.js backwards is as simple as

For example, here’s elba applied to the popular underscore.js library. And yes, it works! 🙃

Preview image is an original illustrations from Alice’s Adventures in Wonderland, drawn by John Tenniel, via alice-in-wonderland.net

09 November 2016
Behind the scenes, TRON2.0 Filters and Functions