Not all counties are equal

Welcome to a new series, Administrivia: The amazing structure of the places we live. 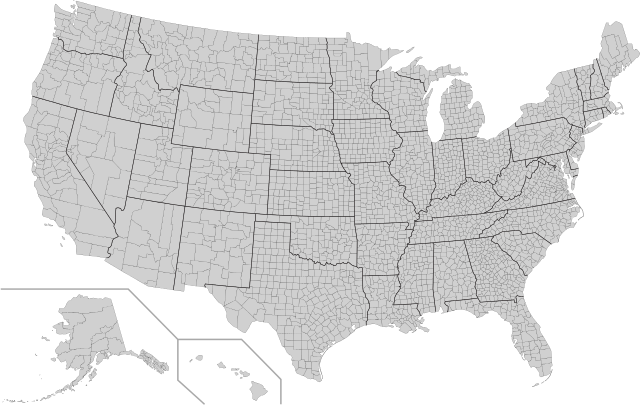 US Counties, via via Wikimedia

Counties are something to be appreciated. Their names resonate. Americans know the county they live in, they know they pay taxes there. Annual county fairs are a time-honored tradition in many counties, some that predate the United States.

It’s names. It’s organizations. It’s history (e.g. Louisiana church parishes). It’s organization of Alaska (where counties were forbidden). It’s the history of independent cities (why did these folks break away?). This is less of geocoding blog post and more of an appreciation of administrative trivia. These are the crazy levels of democracy.

Most countries on this planet we call Earth have administrative breakdowns to handle things like elected representatives, taxation, and law enforcement. In the United States with a population of over 320 million, the first subdivision consists of states, territories, and a federal district (this is a bit simplistic, but for the sake of brevity I’m going to generalize a bit). States are composed of counties, which are, in turn, composed of cities. Lichtenstein, however, with 0.002% of the area and 0.012% of the population of the US, requires less complexity to administer effectively.

In the United States, we tend to call these “administrative subdivisions of a state” counties. Examples include Lancaster County in Pennsylvania and Wayne County in Michigan. The island of Maui in Hawaii is 1 of 5 islands that comprise Maui County. The word ‘County’ isn’t just decoration, it’s part of the official name.

If the gazetteer for your geocoder doesn’t include the fully-qualified name, it’s quite understandable to assume that appending the word 'County’ would suffice, but what appears to be a simple rule reveals a much more complicated underbelly upon closer inspection.

Some counties, such as Essex County, MA and Tallahatchie, MS, have 2 county seats.

It’s a forgivable peccadillo to assume that all county names end with the word “County”. This is true for the vast majority of the 3144 county-level governments in the United States, but history has a few things to say along the way.

The area that eventually became Louisiana, once under the oversight of French and Spanish Roman Catholic church, was made up of administrative territories that roughly coincided with church parishes. The name stuck so, instead of being given the “County” name, every county-level governmental entity in the state ends with “Parish”. Some examples are East Baton Rouge Parish and Orleans Parish – there are 64 parishes all together.

Six of the Alaskan boroughs, referred to as “consolidated city-boroughs”, do not further break down administratively into cities. That is, the governments of the boroughs of Anchorage, Haines, Juneau, Sitka, Wrangell, and Yakutat function as the centers of government for any cities and towns contained in those boroughs. Other boroughs, such as Denali consist of cities and towns that can have their own local government.

For naming purposes, the census areas are all appended with “Census Area”, for example:

Why were they called boroughs? In 1912, when Alaska became a U.S. territory, Congress forbade the Alaskan Government from making counties (along with doing a lot of other things).

While Virginia has 38 independent cities (such as Virginia Beach and Poquoson), there are only 3 others in the United States:

Unlike independent cities, some city and county governments are one and the same. Notable examples include San Francisco, Denver, Philadelphia, and Honolulu (along with Anchorage and New Orleans). San Francisco County once extended down what is now Palo Alto, but was broken in two in 1856 by the California state legislature. The city and county governments were merged, nominally to fight city corruption and boom town violence. 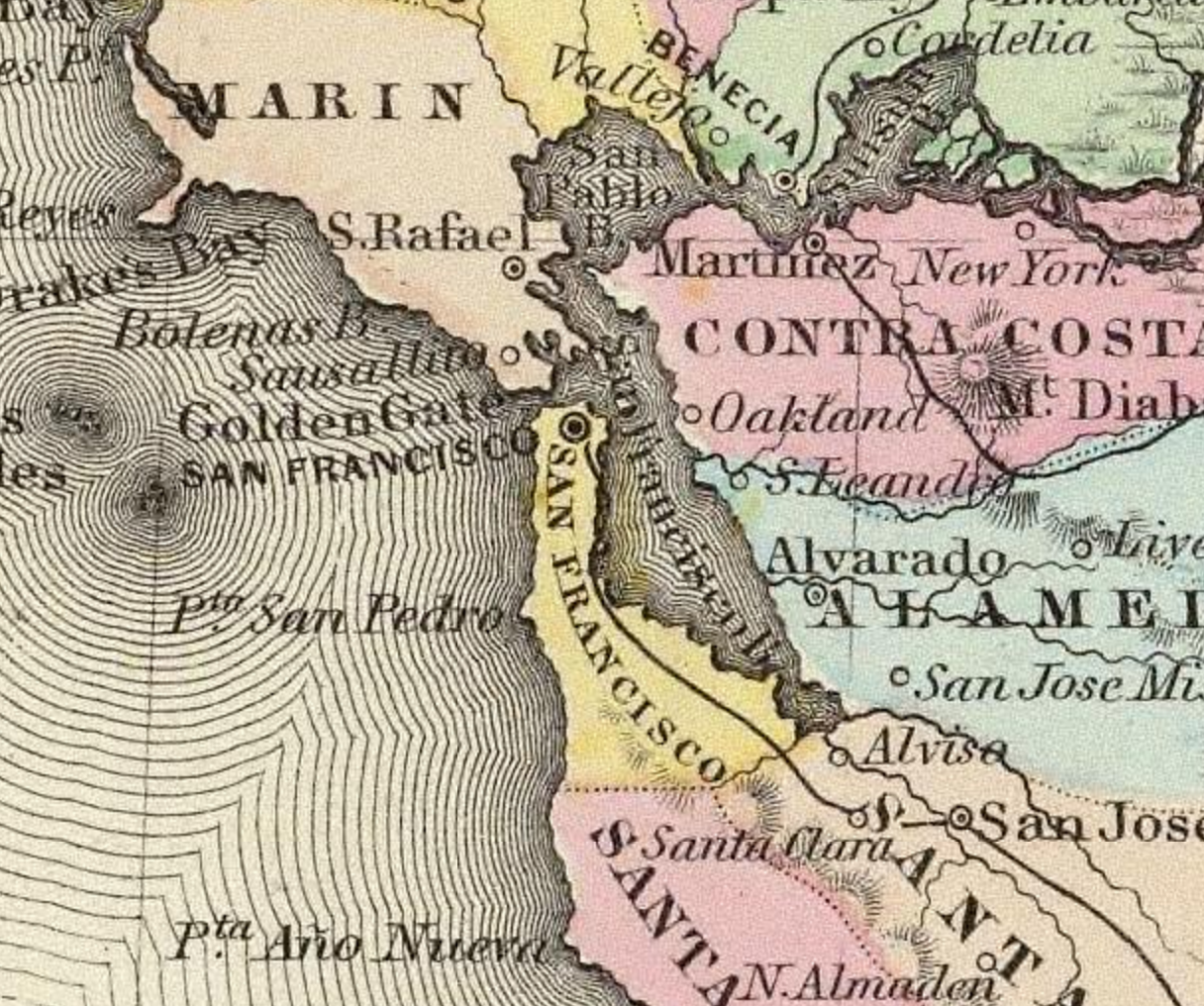 California Counties in 1856, via David Rumsey

Unless you live in Connecticut or Rhode Island1, which have mostly eliminated the governmental functions of counties, your county probably provides a whole host of functions you probably don’t think about on a regular basis, but makes up a ton of what we think of as local government, but the scope of their function varies tremendously state-by-state.

Counties are usually responsible for local courts and have law enforcement (in the form of the County Sheriff). In most places they’ve got the power to tax, issue government bonds, can coordinate local infrastructure projects, and run local services like schools, libraries, jails, and governmental records offices. Often they’re responsible for organizing elections.

And while not the case in all areas, the wide-ranging power of counties can have a dramatic impact on its citizens lives.

The Allegory of the “Special District”

An interesting way to look at the power of counties is not through a county itself, but a “Special District”, a form of local government that’s created for a specific purpose and holds many of the same powers as counties. Last Week Tonight with John Oliver has a particularly great overview of special districts.

But perhaps the most famous special district is the Reedy Creek Improvement District outside Orlando, Florida. It exists as the local government for Disney World. It’s made up of land that’s part of Florida’s Orange and Osceola counties, but for all intents and purposes, it’s the county. It’s got an elected Board of Supervisors, but as the Orlando Sentinel noted in a 2011 profile2 of a rare election in the district, landowners in the district get one vote per acre of land they own and it’s Disney that owns 2/3 of the land. In order to be elected to the board, you have to be a landowner as well, so incoming board members are given 5 inaccessible, undevelopable acres to qualify, but then sign a contract that requires them to give back the land when their time on the board ends. (Rest assured, most counties don’t give their elected land to qualify for administration).

With the power of a special district comes the power to charge taxes (primarily sales taxes), issue public bonds for the construction of infrastructure, run and repair roads, canals, utilities, and run the fire department. They set the zoning rules, building codes, and environmental control rules.

There are 2 full cities, Lake Buena Vista and Bay Lake, which are unincorporated to either of the counties, but have their own Mayors and City Councils (also elected by landowners) who are already employees of Disney World. And when Disney created the planned town of Celebration, Florida they de-annexed the territory of the town back into the exclusive jurisdiction of Osceola County so it wouldn’t have to get involved in the affairs of actual residents who weren’t employees of the park.

And while there’s neither law enforcement capacity nor courts, it doesn’t stop people asking about Disney Jail.

It’s a remarkable microcosm of local government3. The choices of what Reedy Creek Improvement District does, and importantly, doesn’t do show an awful lot about where the powers of individual companies and people end and government begins.

And so we conclude our brief tour of counties. There’s a lot more wonderful and weirdness to catalog. If this excites you, you might want to take a look at our open data project for organizing the world, Who’s on First and consider getting involved.

U.S. counties may be weird, but they are ours, a combination of countless decisions, made by known and unknown citizens, in every state, over nearly four centuries.

(You can dig into historic county boundary data via the Newberry Library if you want to make your own visualizations.)

If you want to dig deeper into counties, the Wikipedia article County (United States) is a great place to start. This post owes a great debt of gratitude to the amazing Wikipedia article on the Reedy Creek Improvement District as well as the book Married to the Mouse: Walt Disney World and Orlando by Richard Foglesong.

And if you have opinions about counties, or what we wrote about them, let us know over in this gist!